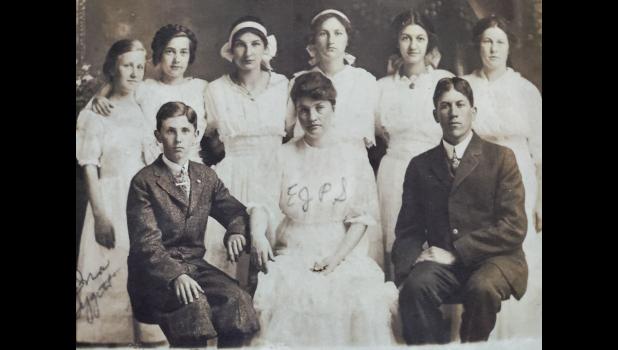 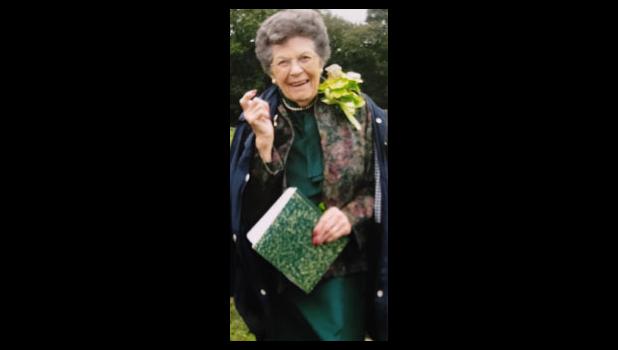 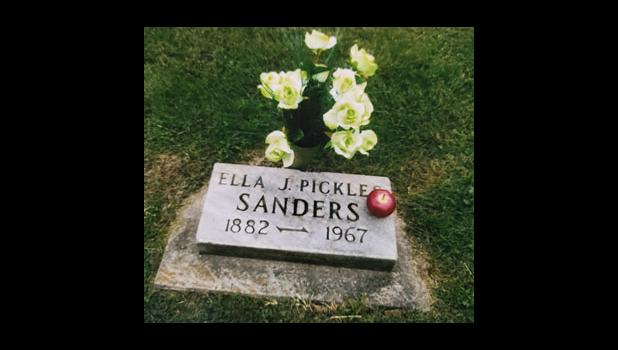 The event continued PAST’s series of “visits” with historical people of Union County’s past.

PAST’s Barbara Bauer portrayed the iconic, much-loved teacher of long tenure with, as Mrs. Sanders would say, “Vim, vigor and vitality! Now put that in your little green pipe and smoke it.”

Not a phrase that would likely be acceptable in the classroom today, but most former freshman English students of Mrs. “EJPS” remember her familiar little jovial joke with fondness.  That quip and her green ink were trademarks of her personality, along with genuine affection for her students.

Mrs. Sanders’ “claim to fame” had to do with her longevity as a teacher. During her 57 (or so) years as an educator, she taught numerous two-generation family members. Her celebrity secret was that she had taught three generations of one Union County family.

Ella Jane Pickles was born in Johnson County in 1882.

Her father, Moses Monroe Pickles was an educator who rode a mule from Buncombe to Anna to be a school master at Nimmo School.

He and her mother, Martha Hudgens Pickles, saw to it that Ella Jane and her sister Anne were trained at home, not only in academics, but also in social graces.

Eventually the family lived in Jonesboro and the girls attended school there.

It is unclear what teaching credentials she had earned when Ella Jane Pickles began teaching in Jonesboro in 1905.

She married Dr. Karl D. Sanders, M.D., in 1908 and completed her degree studies in education at Southern Illinois Normal University in 1925.

She taught at Jonesboro High School and at Anna High School, preceding her long and notable career in freshman English at Anna-Jonesboro Community High School.  She was recognized in 1957 for 50 years of “outstanding service” in education, and for “reflecting high ideals for youth of today.”

In 1958, she was honored by the Chamber of Commerce as “Outstanding Citizen of the Year.” She taught another five years and retired in 1962 at the age of 80.

In her portrayal of the revered teacher, interpreter Barbara Bauer summarized what she expected Mrs. Sander’s personal response would have been to numerous accolades in her honor.

“It was always my aim to find something lovely or admirable, or positive in every student and to offer encouragement to each endeavor.

“Now, put that in your little green pipe and smoke it with vim, vigor and vitality!”