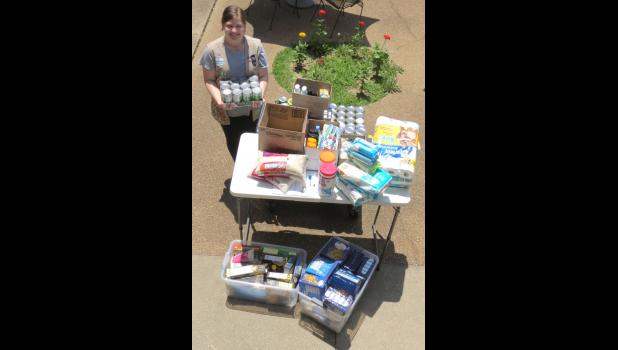 A Union County Girl Scout collected hundreds of items during a food drive which was held Saturday, June 5.

Anna Rodgers of Jonesboro is a member of Girl Scout Troop 8546. She organized the food drive which was held on Saturday, June 5, at St. Joseph Catholic Church in Cobden.

Food items, as well as non-food related items, were collected.

Non-food related items such as hand sanitizer, gloves and diapers also were accepted.

The food drive was a big success, with more than 750 items collected.

The many items which were collected went to a food pantry which is operated by St. Joseph Catholic Church. The pantry serves members of the community. She also helped to organize the items collected in the food drive for the pantry.

The food drive took place in the midst of the ongoing COVID-19 pandemic, which appears to be easing in Illinois, including the southern part of the state. The June 5 event is one part of the project Anna is completing to earn the Girl Scout Gold Award.

Anna, who will be a senor at Anna-Jonesboro Community High School and is the daughter of Valerie Palmer and Roy Rodgers said that for her project, she wanted to do something to bring the community together while also seeing how people have been affected by the pandemic.

To that end, she has been interviewing people, including teachers at A-JCHS, to see how they have coped with the pandemic. Videos of her interviews, along with more information about the project, can be seen on her Connect2Cope Facebook and Instagram pages.

Anna plans to organize another community food drive, which tentatively is scheduled in August...around the time that a new school year begins. She hopes to finish the work on her Girl Scout Gold Award project by December.