More than four dozen students from the 59th District in Southern Illinois traveled to the Capitol in Springfield on March 3 to participate in the spring meeting of State Sen. Dale Fowler’s, R-Harrisburg, Youth Advisory Council, YAC.

“As an elected official, I have a responsibility to reach out to the next generation, encouraging their interests and promoting civic engagement,” Fowler said in a news release.

“It is my hope that after participating in my Youth Advisory Council, these students feel better educated on the policy-making process and recognize that they have the ability to effect real change.”

When asked why it is important for young people to get involved in politics, Latayvia Little from Cairo High School said, “Because it involves us. Everything they say has to do with us in some type of way.”

Students from 15 different schools across the 59th District arrived at the Capitol for the annual event.

The students began their day in the Illinois State Senate Chambers and touring the Capitol building before speaking with lawmakers who represent districts across the state.

“We heard a lot of speeches from important people in the community and at the state level. It was really interesting,” said Rheis Wasson from Harrisburg High School.

Later in the day, students were immersed in a simulation of Illinois’ legislative process.

They broke into groups and participated in a mock committee hearing on legislation that was proposed by the students when they met in October 2019.

Students took on the roles of lawmakers, lobbyists, concerned citizens and reporters in the process.

“It’s kind of my dream to be involved in politics eventually,” said Hunter Biggerstaff from Eldorado High School. “This is a good experience for anybody, whether you’re interested in politics or not.”

“The rules and laws that our officials make impact us even before we are able to vote, so it’s important for everyone to be involved in government,” said Calvin Lindner from Johnston City High School.

Students spent the afternoon hearing testimony, lobbying and discussing their proposed legislation to require Illinois schools to have a resource officer and metal detectors.

“I hope this experience allows students to recognize that potential within themselves and pushes them to work hard, stay involved and make a difference.” 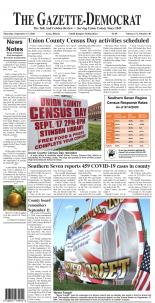