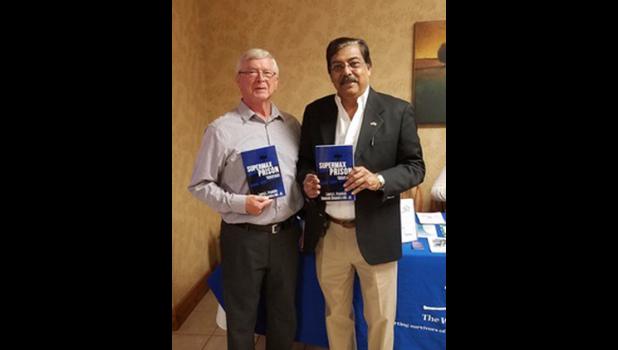 Larry L. Franklin and Dr. Rakesh Chandra on Sept. 9 unveiled their new book, “Supermax Prison: Controlling the most dangerous criminals,” to a crowd of some 100 people at Keller’s Crossing at Stone Creek in Makanda.

The supermax at Tamms, Illinois, is their case in point.  Covering its rise and fall, the authors show how local developers in Southern Illinois, one of the state’s most impoverished areas, convinced the governor to award the supermax to the Village of Tamms, bringing with it hundreds of jobs.

Soon, though, it became a subject of controversy, lauded on one hand as a model of rehabilitation, therapeutic support and security for both inmates and employees, and on the other as a torture chamber.

The authors said that “Supermax Prison” is a must-read for anyone interested in the U.S. criminal justice system and its supermax prisons, and should be of particular interest to residents of Southern Illinois.

The Ebook is currently available, and the paperback is scheduled to be released in approximately two weeks.

The authors shared the following excerpt from the book:

Jerry Reppert – publisher of The Gazette-Democrat in Anna, Illinois – was about to make history.

Reppert was so determined to replace the jobs lost to his community that he traveled to Springfield, Illinois to share his latest idea – establish a training site in the Anna area for correctional officers.

While his contacts in Springfield showed little interest in his idea, he did learn that Governor Edgar had appointed a task force to examine the possibility of building a supermax prison.

If approved, the prison could make southern Illinois its home, where employee rates topped 18 percent in the rural counties. Reppert drove away that day with a copy of the task force report.

What followed is history. The supermax and a minimum-security prisons were built years later on the outskirts of Tamms, Illinois, providing an estimated prison payroll of $15 million, with a total operating budget of $20 million.

The Village of Tamms received the best Home Town Projects award and the coveted Governor’s Cup.