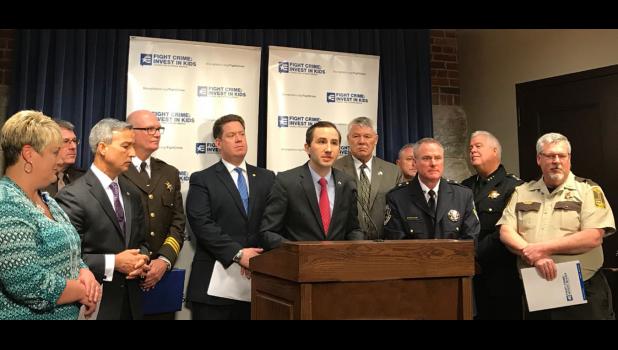 “Law enforcement throughout Illinois recognizes that the best way to prevent crime is to invest in youth to help steer them toward a good start in life” Edmonds said.

“These programs save taxpayer money and strengthen families and communities making us all safer.”

•Home Visiting Programs: help for the new parents of at-risk infants and toddlers, reducing child abuse and neglect, among other positive results.

Edmonds and other law enforcement leaders also released a report on the severity of the opioid epidemic in Illinois, and evidence-based prevention efforts that can be a key component of the response to that epidemic.

The report, “Stopping the Opioid Crisis Begins at Home,” highlights the role of home visiting programs – voluntary programs in which nurses or other trained professionals coach at-risk parents during pregnancy or during the first three years of a child’s life – in reducing Adverse Childhood Experiences.

The law enforcement leaders of Fight Crime: Invest in Kids are prioritizing anti-opioid efforts because of the scope of the problem in Illinois: the state saw a 76 percent increase in opioid overdose deaths from 2013 to 2016, and the rate of babies born with opioid withdrawal – also known as Neonatal Abstinence Syndrome – increased 53 percent from 2011 to 2016.

The law enforcement leaders of Fight Crime: Invest in Kids emphasized that evidence-based prevention programs were just part of a multi-pronged approach, which includes law enforcement efforts to put dealers behind bars, direct addicts to treatment, save lives through the use of naloxone and take action in the courts.

“But we’re here today to say: Our approach is incomplete and insufficient if it doesn’t include appropriate attention to prevention, and the role of proven early childhood investments.”

Edmonds serves as co-chair of Fight Crime: Invest in Kids, the state office of a national, non-profit, bipartisan, anti-crime organization of more than 5,000 police chiefs, sheriffs, prosecutors, leaders of law enforcement organizations, and victims of crime. The organization has more than 300 members in Illinois.