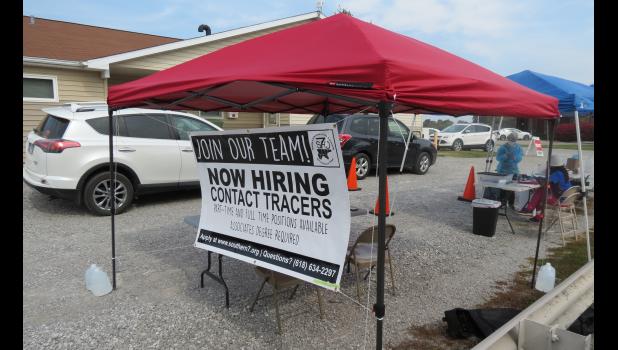 An orange designation indicates warning signs of increased COVID-19 risk in the community.

The health advised that residents are asked to remain vigilant to slow spread of the virus.

Eight different indicators are used to determine a county’s designation.

A county is considered at the orange “Warning” level when at least two of the main indicators are going in the wrong direction.

The health department said that individuals, families and community groups should use this information to help inform their choices about personal and family gatherings, as well as what activities they choose to do.

Both Union and Johnson counties showed an increase in two risk metrics from Sept. 27 to Oct. 3, which led to an orange “Warning” designation for the counties for two categories: new cases per 100,000 and Test Positivity Percentage.

A warning for new case rate indicates the rate is greater than 50 cases per 100,000 people.

A warning for test positivity indicates that the percentage was above 8 percent from the previous seven-day period.

New cases per 100,000 people rate is a unit of measure calculated as a rate to compare the number of cases in large and small counties.

The rate is calculated by dividing the county case count for seven days by county population times 100,000.  This describes the potential number of people who are currently ill and may be infectious in the county.

Although Massac and Pulaski counties both reccorded a decrease in the number of new cases and test positivity, the rates weren’t enough of a drop to remove the warning designation.

“As a nation, we realized this past week that this virus can affect any of us,” Southern Seven community outreach coordinator Shawnna Rhine said in a news release.

“These warnings for our region must be taken seriously, and safety measures must be followed to slow the spread of this relentless disease.”

The health department continues to work with businesses and many other facets of the community to prevent and control the spread of COVID-19.

As of Oct. 8, 1,347 residents had tested positive for the disease. Twenty-five deaths had been reported.