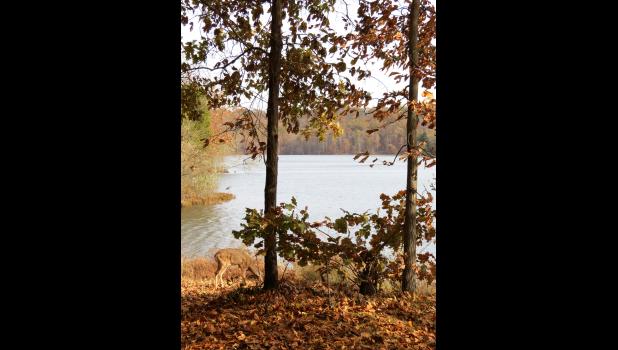 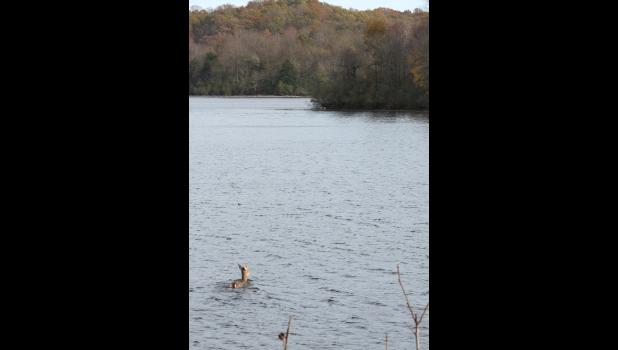 Up-close and personal with white-tailed deer

Truthfully, it might have been hard to determine who was more surprised by a rather brief encounter which occurred during the second afternoon of November at a popular Southern Illinois lake.

The encounter involved a creature of the four-legged variety and another critter with a mere two legs.

The critter with four legs was a nice sized white-tailed deer. The critter with two legs was lugging a camera, hoping to get some interesting pics. Which, as it turned out, is what happened.

I paid a visit to Cedar Lake, not far from Pomona, on Saturday afternoon, November 9. The day was cool. The sun was shining.

After parking the car, I snapped a few pics of the landscape...and waterscape. Then, pretty much on a whim, I decided to take a stroll on a path along the shoreline. The walk on the path led to my encounter with a white-tailed deer which apparently had a little bit of Michael Phelps in him...or her.

I managed to get a photo of the deer grazing on some sort of snack. At that point, the deer, realizing that it was being watched, looked in my direction. A moment later, the deer calmly stepped into the waters of Cedar Lake and began swimming away.

I had heard that white-tailed deer could indeed swim.  I had seen deer splash through flood waters one time not far from metropolitan Reynoldsville in the southwestern part of Union County.

However, until that encounter a couple of weeks ago, I had never actually seen a deer pretend like it was a beaver or a muskrat or some other creature one might associate with getting wet.

That got me to wondering: are deer actually good swimmers? I’m pretty sure that folks who hunt on a regular basis would have known the answer to that question. I did not. So, I did a little bit of research. Online. Of course.

Allow me to share some of the things I learned about the white-tailed deer, which I did not know. As always, I’ll mention that since the information was posted online, it absolutely, positively has to be true.

White-tailed deer, it would seem, are powerful swimmers. They are quite capable of swimming across bodies of water. Like Cedar Lake. A deer can swim at a speed of about 13 miles per hour. Maybe faster if it doesn’t want its picture taken.

The biggamelogic.com website shared some other fascinating tidbits about white-tailed deer, including:

Deer have a four-chamber stomach that allows them to digest tough plant foods. I’m pretty sure that the deer I spotted was munching on some tough plant foods, until it was so rudely interrupted.

In a related matter...deer are herbivores. They eat grass, leaves, stems, shoots, berries, herbs, acorns, mushrooms, wild fruit and agricultural crops, like corn and soybeans. They also like the crops growing in The Other Half’s garden.

The white-tailed deer’s eyes are located on the side of its head. This gives the critter what amounts to more than 300 degrees of vision, without moving its head. The position of the eyes on the deer’s head apparently make it hard for a deer to focus on objects. The one I encountered didn’t seem like it was having much of a problem focusing on the critter which had interrupted its snack time.

Once a deer establishes a territory, it will not leave unless it is bumped out by predators...or an irritating human being with a camera.

The muscles in a deer’s head allow the critter to turn its ears in any direction without moving its head. A deer’s hearing may be so sensitive that it can determine how far away a sound was made. A sound like the one made by a camera. Which was why I only managed to get one halfway decent photo of the deer before it exited, stage water.

As noted earlier, if you happen to be a hunter, or maybe a wildlife biologist, you probably already knew all of this stuff about deer. I did not know these things. I do know that venison tastes really good on the grill.

By the way...good luck to all of you hunters who may be heading out for the upcoming first weekend of this year’s firearm deer season in Illinois. Good hunting. Stay safe.

There was one thing which I did not find out during my 10 or 15 minutes of research: when a deer goes for a swim, does it use a doggy paddle?