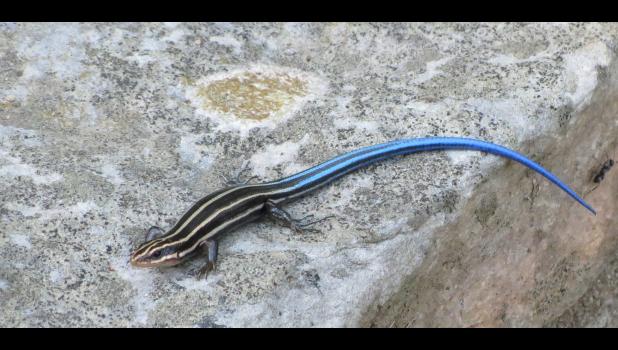 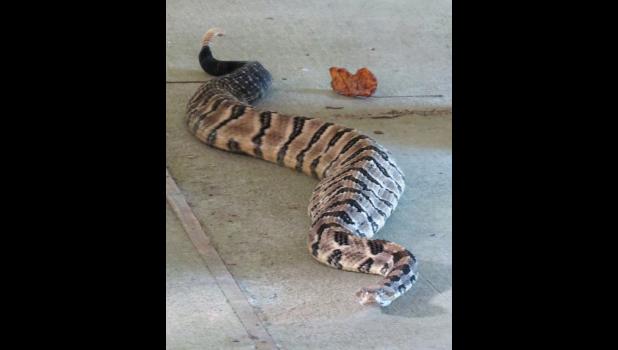 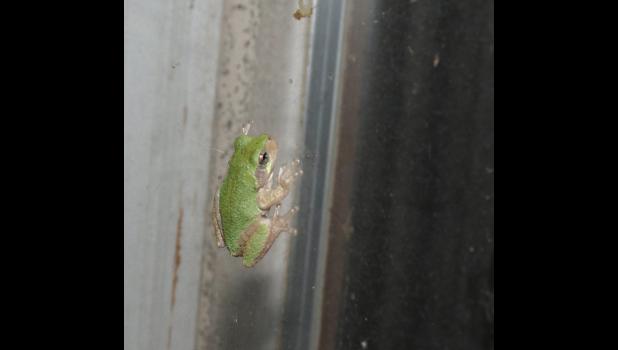 Close encounters of the critter kind...

Honestly folks...you can’t say that you weren’t warned about the image of the snake, which we will get back to in just a bit...

...just because I can’t think of anything else to call this week’s adventure, we’re going with Close Encounters of the Critter Kind. Actually, make that Critters. As in a skink, a very confident groundhog, a pair of squirrels, a lone squirrel which met a sad end, a frog, an armadillo...and a timber rattlesnake.

Let’s start with the skink. In this case, we’re talking about a blue-tailed skink which yours truly happened to see on a recent rather warm September afternoon. The skink was enjoying the warmth on some rocks at a place which I frequent. The critter was gracious enough to hang around for a photo or two, and then scampered away to do whatever it is that skinks do.

(By the way, have you ever pondered this: with a simple change of a vowel, a skink could become a skunk. Just a thought.)

The aforementioned confident groundhog (or woodchuck, if you prefer) was spotted one afternoon last week while your writer was motoring home from The Paragraph Factory for lunch.

Heading into my hometown, I could see some sort of critter kind of ambling across what can, at times, be a very busy highway. Such concerns did not seem to matter to the groundhog, which appeared to be rather young.

Fortunately, the critter made it safely across the highway and disappeared into the grass and weeds which were growing along the highway.

Two squirrels and your writer crossed paths one morning a couple of weeks ago.

I was leaving our humble abode, walking across the porch. I happened to hear some sort of rustling in the leaves and grass next to the porch.

Looked down, and there were two squirrels. Normally, when those of us who are human beings come in contact with our little bushy-tailed friends, they move quickly away in the opposite direction.

Not these two. Nope. Instead of running away, they apparently got it into their minds that they would introduce themselves to me. One of the squirrels seemed to quickly realize what it was doing, and zoomed away into the yard.

The other critter continued to head in my direction. For a moment, I was fearing for my life and trying to figure out a death by squirrel story. Fortunately, the squirrel disappeared under a shelf on the porch. Then, it also ran into the yard.

At least these two squirrels were still in the here and now, which is more than I can say for one of their cousins, which I spotted while on one of my daily walkabouts. What I saw was rather weird, and very sad.

Somehow, this squirrel met a very bad end on a utility wire. Oddly, though, the squirrel did not fall off of the wire. Instead, its left paw was still wrapped around the wire. And it appeared that its mouth also was attached to the wire.

The poor little guy has just been hanging there. There’s not much that can be done. I just hope that its sad situation mercifully comes to an end.

On a bit of a happier note, a tiny, bright green frog decided to pay a visit to our humble abode one evening last week. Pretty amazing how it could just kind of hang around on a window.

This critter was spotted at an event I attended recently. The snake was featured in a program about reptiles. The person who was handling the snake kept a very close watch on the critter.

In my little world, snakes are welcomed. They help to control the varmints in The Other Half’s garden. We admire their role in nature. We admire their beauty. We respect them. We leave them alone. They leave us alone.

We’ll close with mention of a close encounter a Fellow Traveler on the Journey Through Life had recently with an armadillo. A live armadillo. As opposed to the road-killed versions that most of us get to see.

Apparently the critter showed up in the Traveler’s garden. To say the least, the Traveler was just a bit surprised. Guessing the armadillo was, too.

One last thing for this week...the St. Louis Cardinals once again will be playing baseball in October...after they scored a four-game sweep over a team which shall not be named in its home stadium for the first time since 1921...life is good.