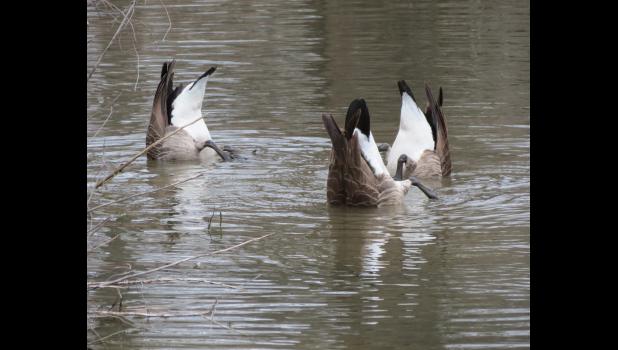 Dabbling with some more goose pictures...

Oh, no, you’re saying to yourself, not more bird pictures. And they are gooses...again...

...even better, they are gooses cabooses.

A number of years ago, another traveler on The Journey Through Life suggested that we stop using so many photographs of white-tailed deer in the newspaper.

My thought was, and is, that the white-tailed deer is a rather important critter in our little corner of the world. Besides, they are beautiful, graceful creatures, which happen to be great for pictures.

Same goes for gooses. For the most part, they are graceful creatures, unless, of course, they happen to get caught in what might seem like a rather unflattering pose.

The gooses you see were on the loose one day last week at one of the places where your intrepid photographer happens to visit while on a daily walk.

The walk itself was much nicer than some of the excursions that I’ve been on in recent weeks, mainly because my face did not freeze and I could still feel all of my fingers, which made taking the pictures a little bit easier.

I am going to guess that I have seen gooses in such poses in the past. However, on this particular day, the bottoms up images just seemed to catch my attention.

Turns out that when a goose has its backside on the upside, so to speak, the image is “a classic pose,” at least according to the naturestories.org website.

The website explains that the image comes to be when “a duck or other waterfowl is swimming along when it upends itself with its head underwater and its tail in the air.”

Turns out this behavior is called “dabbling.” And it’s a feeding behavior. It allows for the critters “to reach aquatic vegetation in shallow water without being fully submerged.”

To be honest with you, I have no idea what kinds of munchies the Canada gooses were enjoying while I was watching them dabble. The gooses did not offer to share any of their treats.

I did allow my simple little mind to wander a bit while pondering dabbling. Suppose other creatures engaged in the same sort of behavior.

Can you imagine what cows might look like if cows happened to dabble? Picture that in your mind: 10 or 20 cows in a field, back ends up, straight in the air, while they graze.

And what if people dabbled? You walk into your favorite restaurant and a room full of folks are munching on burgers and fries, back sides on the upside.

I shared my ideas about dabbling cows and people with The Other Half. As she often does, she rolled her eyes and shook her head. The message, I think, was pretty simple: maybe I should dabble in something other than dabbling.