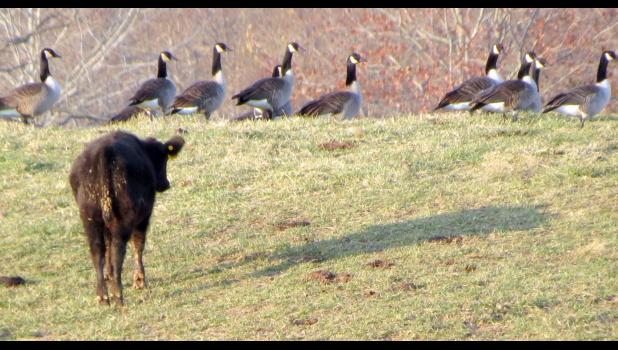 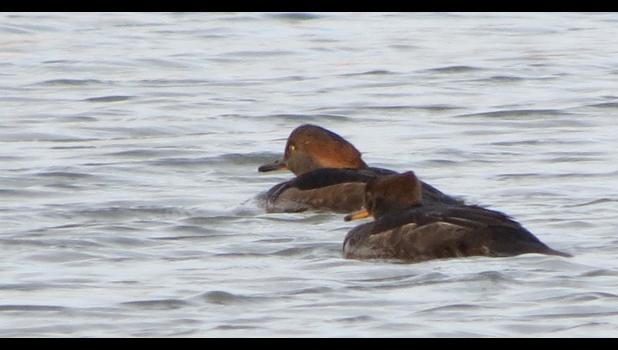 Did you hear the one about the cow and the geese?

The Other Half and yours truly went on another Pandemic Date last Sunday afternoon. We hadn’t been able to do that for a couple of weeks. But the sun was shining, we’d both had a nap...the timing seemed good.

By the way, as I think I’ve mentioned before, I hope you folks aren’t getting tired of reading about what the two of us do on a Sunday afternoon. I’ll be honest with you, though...we feel blessed just to be able to do such things. Especially now.

I’m especially grateful to be able to give The Other Half a chance to see a little bit of the world around us. She’s pretty much been locked down since March, so it really is a blessing to get out and about, even if we don’t go all that far. And last Sunday, we pretty much stayed in the  car, ‘cause it was kind of cold.

I mentioned something about the best laid plans in the opening sentence. As the driver, I pretty much get to choose where we go. My intention last Sunday afternoon was to head off to the woodlands. We’ll call that Plan A.

Well...Plan A didn’t quite work out the way I thought it was going to. Nothing bad happened. We just kind of switched, abruptly, to Plan B And, as it turned out, Plan B turned out fine.

We motored...slowly, along Kaolin Road, heading from suburban Cobden in the general direction of Anna. Mostly, we enjoyed the sights of an early afternoon in December.

I was kind of hoping we might see a few white-tailed deer wandering through the fields and woods. Nope. At least not at first.

We didn’t see many critters at all...until we got to an area along Kaolin Road, not far from old U.S. Route 51, where a pond kind of inches close to the road. We’ve been there before...on another one of our Pandemic Dates.

We saw three ducks gliding through the water, not far from the road. They weren’t mallards or wood ducks. Just not sure what kind of ducks they were. Mergansers, maybe? One of the critters is in the photo. You duck experts out there will know what they are.

Off in the distance, on the far side of the pond, we also  saw something which I don’t think we’d seen before.

Over on a hillside, and at the top of the hill, there were Canada geese...and some cows and calves. As we watched, one of the cows slowly made its way to the edge of the pond, got an drink, and then began to meander in the direction of the geese.

At that point, The Other Half asked an interesting question...one that I’d never thought of...mainly because I’d not seen such a scene before.

“What do a cow and some geese talk about?” she asked.

Maybe they would just have a bull session...and talk politics. After all, a goose could be both left wing and right wing. The cow just wouldn’t be able to talk on the fly. Sorry.

Then again, they just might talk about food. You see, I did some extensive follow-up research on the internet, just for this column. I learned that cows apparently have their own language. Really. And they “talk” to each other about the weather.

An online Smithsonian Magazine article which I found even noted that “Cows Communicate With Unique Moos...A new study has found that the animals use distinct vocalizations across a range of emotional contexts.” I would have thought that when cows need to communicate, they would just use a “moos-paper.” Get it? “moos-paper.” Newspaper...never mind.

Geese, it would seem, also communicate with one another, using different calls for warnings, greetings.

I was not able to determine if cows actually are able to communicate with geese. I guess they could do like The Other Half has been doing for about 10,000 straight days. She’s been learning Spanish online, thanks to a resource called Duolingo.

From what she has told me, Duolingo offers lessons in a whole bunch of languages. However, I do not know if that would include goose or cow. I suppose learning how to speak cow might be offered on something like Moo-o-lingo.

Well, we watched as the cow inched closer to the geese. The geese, in turn, inched away from the cow. We were too far away to hear what they were talking about.

All the while, I’m watching the road...in front of us...and in the rear view mirror. I figured somebody would drive by and wonder why two people had stopped in the middle of the road.

If they had stopped and asked, it might have been kind of tough explaining that we were trying to figure out what a cow and some geese on the far side of the pond were talking about...

Enough for this week...glad you gave this column a gander...and we’ll be moo-ving along...