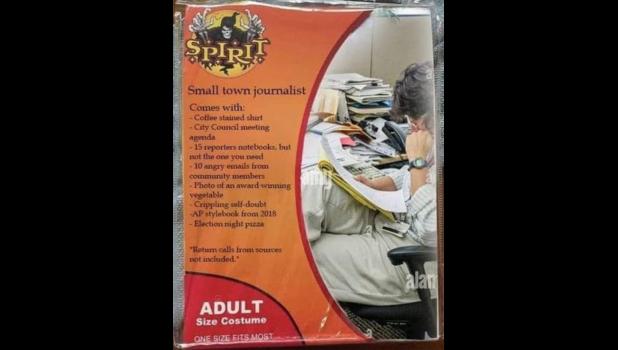 'Hope something good happens to you today...'

The brain waves seemed to have pretty much stopped functioning smoothly Monday night when this little gem was crafted.

The good thing is that I at least have a head start on next year’s Halloween costume, should such a thing actually be needed.

Speaking of Halloween, The Other Half and yours truly spent Monday evening out on the front porch giving treats to ghosts, goblins, dinosaurs and various other creatures of the almost night. We even had one little visitor who was wielding some sort of bubble dispensing whatchamacallit.

For the most part, the kids were pretty good about saying “trick or treat” when they made it past the big ol’ front steps in front of our house.

Some of the kids just kind of looked at us. Apparently they expected that we would just hand over the loot without a single word being uttered. We were pretty sure, though, that they were thinking “trick or treat,” so we gave them some candy.

Most of the kids were very good about saying “thank you,” too. Some needed a bit of encouragement from mom or dad or whoever might have been accompanying them on their Halloween adventures.

A potential Halloween costume was the focus of an email which came my way one day last week.

The email was sent by a fellow traveler on the journey through life who happens to toil at The Paragraph Factory. The email originally was sent to him by a friend.

The email featured an image of an adult size costume for a “Small town journalist.”

The image showed a costume which comes with a bevy of exciting features:

Pretty sure I’ve got one or two of those. Back in the day, I would have had more than one shirt discolored by stains from chemicals used in the dark room to develop black and white film, an old-fashioned form of technology that was once used in cameras for taking photographs. Kids, ask your parents about cameras that used film. Over the years, I shot thousands of photos on film. And, to tell you the truth, I really prefer today’s digital cameras. That’s another story.

15 reporters notebooks, but not the one you need.

That often happens. I counted up the number of reporters notebooks which were on my official small town journalist desk. There were 14 of them.

More likely, there will be phone calls. (I also receive  the occasional nice email. They are treasures.)

A photo of an award-winning vegetable.

Been there, done that. Comes with the territory.

Don’t know about that one. I suppose it happens.

I found an AP stylebook from 1977 on a dusty bookshelf.

Return calls from sources not included.

Actually, folks in our little corner of the world are pretty good about returning phone calls.

I was a little bit disappointed that the costume did not make mention of the Fourth Estate or journalists as ink-stained wretches. Oh, well.

We’ll close this week with a window sticker I saw on the back of a car one day last week in Anna.

The sticker had a rather nice, and unexpected message:

“I hope something good happens to you today.”