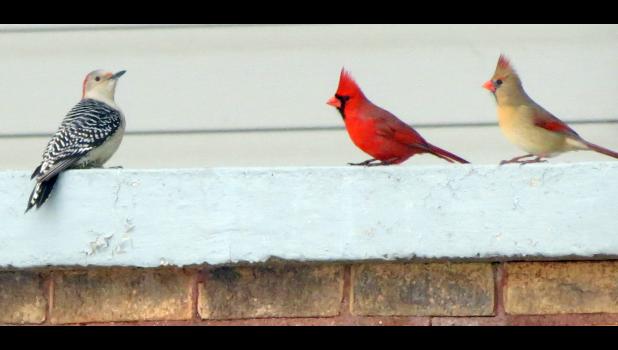 It's cold everywhere...including the Red Planet...

At the time this column was being crafted late last Saturday morning, the temperature on the front porch of our humble abode was a nippy 14 degrees.

Once again, thanks to the wonders of the internet, I was able to determine temperatures at those faraway places.

It was even colder down south. AccuWeather reported that the temperature at the Amundsen-Scott South Pole Station was 35 degrees...below zero. Can’t event imagine. Then again, The Other Half remembers being outdoors in the Montana winter when the temperature was 40 degrees below zero. Either way, it probably would not be a nice day to plan a picnic.

The most recent weather update for the planet Mars was from February 11, which happened to be the day those of us here in Union County on Planet Earth were digging ourselves out of the First Round of the February 2021 Wintergeddon, courtesy of our old friend, the Polar Vortex.

The high temperature on Mars on February 11 was zero. The low was 99 degrees. Below zero.

And how do we know such things? The Mars Curiosity rover is busy doing things like keeping track of the weather on the Red Planet, so we having something to talk about on Planet Earth.

All sorts of information about Curiosity can be found online at mars.nasa.gov. Did you know that as of January 12, 2021, Curiosity had spent 3,000 days on Mars? I didn’t either. The rover arrived on Mars on August 6, 2012.

(At this point, the writer took a bit of a break...and a nap...and did not resume work to finish this masterpiece until Monday afternoon. The writer spent much of Saturday afternoon...and evening...and much of Sunday...paying attention to the weather forecast. Weather forecasts were suggesting that it might snow. A lot. And it would be cold, too. Really cold.)

And little did I know, but there would be a vague sort of connection between what Curiosity is doing on Mars and one of your writer’s favorite pastimes.

While reading about Mars and the rover, I learned that Curiosity had taken a selfie picture at a place called “Mary Anning.”

As explained on mars.nasa.gov, the location is named after “a 19th-century English paleontologist whose discovery of marine-reptile fossils were ignored for generations because of her gender and class.” The rover was at the site to take and analyze drill samples.

Hmmmm. The Mars rover was looking for rocks at a place named after a paleontologist. Your writer likes to look for rocks, too. Generally, I don’t have to travel millions of miles to pursue my hobby. I try to stay a little bit closer to home. Besides that, I’m guessing the cost of gasoline for a trip to Mars might be a little bit expensive.

I didn’t get a chance to find out what kind of rocks the rover found and analyzed. When I go rock hunting, I often look for the fossil of a critter called a trilobite. Curiosity probably won’t find any trilobites on Mars. If it does, now that will be big news.

Guess we’ll finally finish up for this week. Just out of “curiosity,” I decided to see what the temperature might be out on our front porch at 4:19 p.m. on Monday.

14 degrees. Same temperature that it was last Saturday morning when this started. Go figure. One last thing...wonder if there’s a wind chill on Mars...