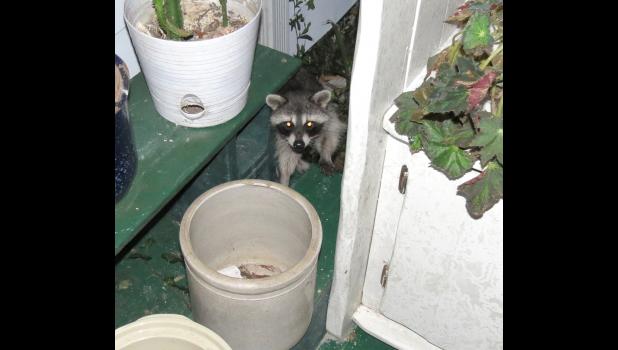 The column kind of started one night last week, when Rocky, the Raccoon, paid another visit to our front porch. And, I’ll have to be honest with you, Rocky was pretty brazen about the whole thing.

Rocky apparently was looking for a snack and discovered that we had some cat food on the front porch, which might not have been a smart move on our part. Rocky found the food and proceeded to munch away.

Well, we happened to see Rocky and attempted to shoo him away. Rocky was a stubborn Raccoon and did not seem in much of a hurry to leave. Even with a flashlight shining on him and a bunch of foot stomping and other noise.

Rocky did finally skulk away into the dark. With a great deal of reluctance. We figure he’ll be back at some point.

By the way, up until I started typing this column, our raccoon didn’t have a name. Well, not that I am aware of. He’s never formally introduced himself. On a whim, I just decided we’ll call him Rocky, because, well, because Rocky Raccoon is so obvious.

Rocky was nowhere to be seen last Sunday night, which was when yours truly decided to watch a little bit of the Rams and Bears tube. The two teams were playing their 2021 National Football League season opener.

I think my interest in the game was piqued by wanting to see the Rams in their new $5.5 billion stadium. Yup. $5.5 billion. As in the kind of money you and I and everyone we know will never, never, never have.

Watching the Rams play brought back a lot of bittersweet memories from the team’s years in St. Louis. Especially the 1999 season, which ended with a Super Bowl championship for the Rams...and St. Louis.

I had to look it up, but the St. Louis Rams opened the 1999 season on September 12...just like this year. The Rams defeated the Baltimore Ravens to open the season. We probably watched the game at our humble abode.

Now, you may be asking yourself, what in the world is the connection between Rocky Raccoon and the National Football League team that used to be in St. Louis? Glad you asked.

While delving into extensive research for about five minutes while trying to figure out where to go with this week’s gem, I stumbled across some interesting stuff online.

(And, as always, I will offer the disclaimer that since the stuff was on the internet, it had to be true.)

Interesting Stuff, Number One: Somebody has created a fictional National Football League team called the Toronto (as in Canada) Raccoons. Really. Mere coincidence. I think not.

Wikipedia, “the free encylopedia” you can find online, explained that the Rocket City Trash Pandas are a Minor League Baseball team and a Double A affiliate of the Los Angeles Angels. The Trash Pandas are located in Madison, Alabama.

The media guide shared: “The name was chosen in a name-the-team contest and is a reference to the area’s association with the space industry and the determination and ingenuity of raccoons, aka trash pandas.” I did not know this, but “trash pandas” apparently is slang for raccoons.

It’s worthy of note that in the name-the-team contest for the Rocket City Nine, Moon Possums was the third favorite choice. Some of the other choices included Comet Jockeys, Puffy Head Bird Legs and Space Sloths.

I will say that our very own Trash Panda, the aforementioned Rocky, was indeed determined about trying to get a snack on our front porch last week. Maybe he was getting ready to watch a ball game.

As for me, I may be adding the Rocket City Trash Pandas to my list of favorite teams, along with the Forest City Owls...

I’m going to close this week by wishing my sweetheart a happy birthday. Friday is the big day. She’s going to be, well, still younger than yours truly...