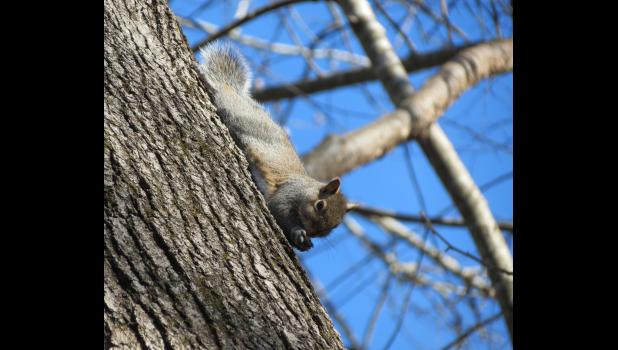 Before we get started on the good stuff, let me just say that I looked at the calendar on Monday, just to make sure it was still November...and not December or January.

At the time this was being crafted on Monday morning, the sky was gray...the wind was blowing...light, drizzly precipitation had been falling...and we were under a WINTER WEATHER ADVISORY...on the 11th day of November, for goodness sake.

The National Weather Service office in Paducah advised, in a rather terse message issued at 10:49 a.m. CST Monday: “Snow expected. Total snow accumulations one to two inches likely. Winds gusting as high as 30 to 35 mph.”

The forecast was calling for sunshine on Tuesday. And a high near 26. NEAR 26??? Along with wind chill values as low as 1 degree below zero. On the 12th day of the 11th month of the year. It’s autumn. Winter doesn’t start until December 21.

And in the for whatever it’s worth category...on Monday morning, before I headed to The Paragraph Factory, I got our snow shovel out of the shed and put it on the front porch. The very same front porch where Bob and I sat in the sunshine...on Sunday afternoon...when it was 63 degrees...sigh...

Squirrels, it would seem, have it in for me. Speaking of critters, did you happen to see the news about the cat that scampered into the end zone during a professional football game? Check it out. You can find it online.

Before we ponder the antics of some of our four-legged friends, yours truly wanted to reflect on a mea culpa involving a name which appeared in last week’s publication.

Mea culpa, as you may recall from a fairly recent use by this writer is a phrase which means: “Oops, that sure was a dumb mistake that I made.” I think that Julius Caesar might have uttered the words when he walked into the Roman Senate on the Ides of March way back in sometime B.C.

Last week, I wrote a story which happened to mention a fellow’s name. Actually, I wrote a bunch of stories which mentioned the names of fellows.

In the particular story to which I am referring, I happened to write that the fellow’s name was Jim. Which was OK...except for the fact that his name was John. Just like it said in my notes. Just like he told me about four or five times when I was talking with him. John.

Jim...um, John, was very gracious about the note of apology which I sent to him. Mea culpa.

OK...let’s get to the squirrels. Squirrels, as you know, can be very cute, and very goofy, creatures. I often mention them in this space. Sometimes, I include a photograph...or two...or three of a squirrel. Like the one a few weeks ago of a squirrel with its mouth stuffed full of dinner.

Well, one bright, sunny, breezy Sunday afternoon a couple of weeks ago, yours truly was on a daily walkabout. As I happened to wander under an oak tree, acorns started raining down on me. Hundreds of them. Well, maybe a couple.

I happened to look up, and caught an ever-so-brief glimpse of a squirrel’s tail as the critter scrambled along a branch in the oak tree. I don’t know what a squirrel sounds like when it is laughing, but I am pretty sure that this critter was having a chuckle at my expense.

During my daily wanderings, I pretty much expect that I’ll see a tiny dog along the way which will bark...and bark...and bark at me. The dog looks too small to cause much damage. Mostly, it’s irritating.

I’ve never really given much thought, though, to squirrels lying in wait, setting up an ambush, and dropping bushels of acorns on my head. Guess I’ll need to stay alert from now on. Don’t need to be any nuttier that I already am.