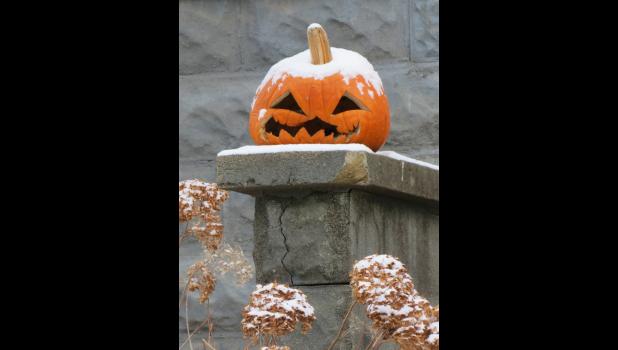 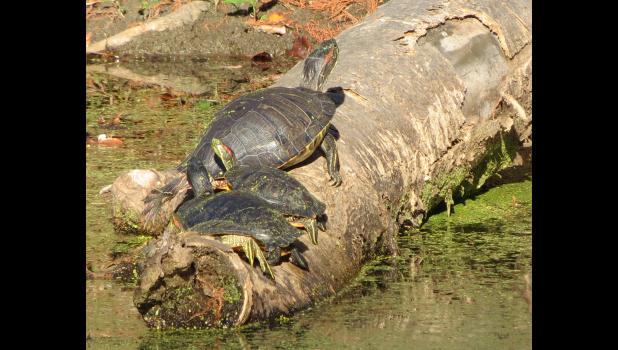 ...you may (or may not) recall that in last week’s column, The Other Half had alerted yours truly to the possibility of some icy precipitation, as in snow, which was appearing in a long-range forecast she had seen online.

At the time, I scoffed at such a chilly outlook. After all, it was still pretty warm in our little corner of the world, at least for November.

Warmth and sunshine were hanging in there Thursday afternoon, November 10, when your writer paid a visit to the Lincoln Memorial Picnic Grounds in Jonesboro. I went for a walk around what’s left of the pond at the park. During the walk, I saw around half a dozen turtles that were taking full advantage of the warm weather and sunshine.

About 24 hours later, the spring/somewhat summer-like weather was heading out the door, apparently being shooed away by Old Man Winter.

Oh, did I mention the snow?

“Light snow tonight into Saturday morning” the National Weather Service office in Paducah was advising those who dared to check out the forecast during the day on Friday.

The forecast was calling for the possibility of “a dusting to half an inch.” I saw that. And scoffed again.

Early Saturday morning, we were indeed greeted by a “dusting” of snow, which just did not seem right. Especially since the temperature had been 81 degrees only a few days before. Oh, well.

I decided to venture out into the cold and snowy world to take a few photographs. I managed to get in a daily walkabout in the early morning hours.

As I was wandering around, I noticed a couple of jack-o-lanterns that were still hanging around outside. That was not unexpected, since Halloween was still fresh in our memories. That was when I was pretty sure that I heard Mr. Jack O’Lantern laughing...at me...or maybe at the idea of snow on the ground on November 12.

Sunday offered a bit of a reprieve. It was still cold, but the sun was shining and most of Saturday’s snow has melted away. At one point early in the afternoon, I sat out on our front porch stoop and watched a couple of butterflies landing on some flowers that were still in bloom.

That being said, on Sunday evening, I took Bob outside to assure him that it was too cold to spend some time on our porch swing. It was shortly after 5 o’clock...it was cold (our thermometer showed 36 degrees)...it was dark (daylight saving time is a fading memory)...

Old Man Winter does not seem to be finished with his preseason performance on Saturday...

...snow was possible again Monday night, but we did not see any. And it’s supposed to be really cold by this weekend. I guess the good thing is that there aren’t mosquitoes...