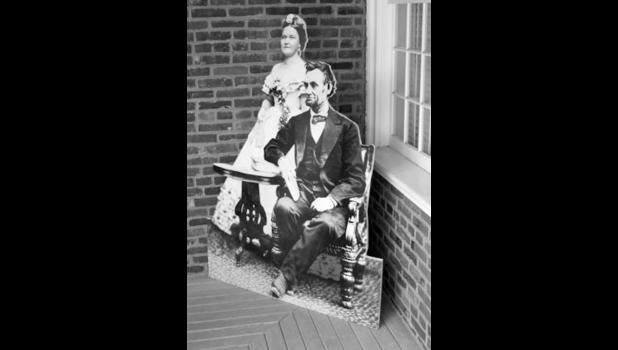 The sweltering heat and humidity of July seem like a distant memory. Or, maybe, a dream of what is yet to come. Whew. That's pretty deep, in a philosopher-wanna-be sort of way.

July's heat and humidity came to mind last Friday morning as I was pondering how to fill this space. I glanced up at the nifty calendar on my wall and noticed that Friday, February 12, is Lincoln's birthday. As in that fellow named Abraham Lincoln.

I thought maybe it would be nice this week to reflect a little bit on Mr. Lincoln, his life and his connection to Union County. The reason summer heat and humidity came to mind was because of a visit we had paid to Mr. Lincoln's birthplace in Kentucky. On the day of our visit, last July, the weather was H-O-T and H-U-M-I-D.

All of us, especially here in Illinois, are familiar with Mr. Lincoln's story. After all, we are living in the Land of Lincoln.

And, sure, we are all familiar with Lincoln's visit to Union County with another gentleman named Stephen A. Douglas, way back in September of 1858. You are familiar with that story, right?

In the "just because I can" category, let's take a look back to that, with a little of help from local historian and author Darrel Dexter. Mr. Dexter wrote a book titled "A House Divided: Union County, Illinois 1818-1865."

I hope Mr. Dexter doesn't mind much if we share some excerpts from his book this week, in honor of Mr. Lincoln's birthday...

(...just as a bit of an introduction, we'll begin with Mr. Dexter's observation that in 1858, "the United States was a country divided over the issue of slavery"...)

"Perhaps the most notable event in Union County history was in 1858, when Abraham Lincoln and Stephen A. Douglas squared off at Jonesboro in the Lincoln-Douglas debate. The attention of the nation was on Jonesboro that day, known as 'the day Lincoln came to Egypt.'

"Although U.S. senators were at the time elected by the state legislators and not directly by the people, seven debates were scheduled in Ottawa, Freeport, Jonesboro, Charleston, Galesburg, Quincy and Alton to give the people a chance to hear both candidates.

"Jonesboro was the debate farthest south. Lincoln felt the political contest in Union County and other parts of Southern Illinois, which was almost solidly Democratic, was between the two factions of that party and he had no chance of changing many voters' minds by coming to Jonesboro.

"Although Lincoln did not have many political allies in Union County, he did have friends. Col. John S. Hacker of Cairo, was originally from Jonesboro and his sons Dr. Henry C. Hacker and Rep. William A. Hacker still lived there. Col. Hacker had known Lincoln since they served together in the Illinois General Assembly. Hacker was a Douglas Democrat, and a close friend of Sen. Douglas and had served in Washington, D.C., as secretary of the important Committee on Territories.

"A friend and political ally of Lincoln was David Layman Phillips of Anna, the Republican's candidate for U.S. representative in 1858 against John A. Logan. Phillips settled in Jonesboro in 1851, where he was pastor of Clear Creek Baptist Church until 1853. In 1854, he became land agent for the Illinois Central Railroad, while Abraham Lincoln was the railroad's lawyer. He was one of the first people to move to Anna, where he and his brother Isaac N. Phillips erected the European Hotel. In 1855 Phillips became Anna's first postmaster and was elected a trustee in the town's first election.

"Phillips, an early editor of the Jonesboro Gazette, had attended the Anti-Nebraska Editorial Convention at Decatur in February 1856, where Lincoln was a visitor. Phillips was elected to the committee to organize a new political party. The party...later became the Republican party.

"D.L. Phillips met Lincoln in Centralia the day before the Jonesboro debate and accompanied him to Anna on the Illinois Central Railroad. When they arrived at the Anna depot, no one met them at the train. Lincoln stayed with Phillips at his home on Main Street in Anna.

"After the evening meal, Lincoln, Phillips and his son Judson visited newspaper reporters Horace White and Robert R. Hitt, both correspondents for the Chicago Tribune. They had been assigned to travel with Lincoln during the campaign and were staying at the Union Hotel on the square in Jonesboro.

"That night, the group sat in front of the hotel and stood on the porch and watched Donati's comet, before returning to Anna, where Lincoln spent the night in Phillips' home.

"The next morning, 26-year-old Dr. Hugh McVean, a physician in Anna, who lived near Phillips, took Lincoln, Phillips and Phillips' son Judson, who was about 11 years old, on a ride through the country. As they drove, Lincoln told funny stories and kept Dr. McVean in a constant uproar of laughter..."

I hope you don't mind this trip way, way down memory lane. I just happen to find the whole idea of Abraham Lincoln driving through the Union County countryside and telling jokes to be fascinating. Can you imagine what it might have been like to have been along for that ride?

Enough for now. Sorry if it's a little windier than usual. But, if this has piqued your interest, even just a little bit, you might want to find out some more of the story about Mr. Lincoln's visit to Union County. Check it out...