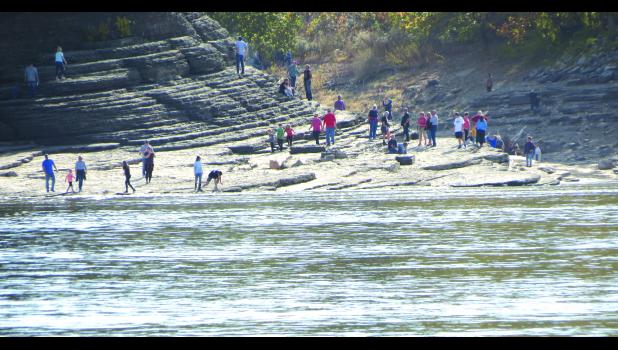 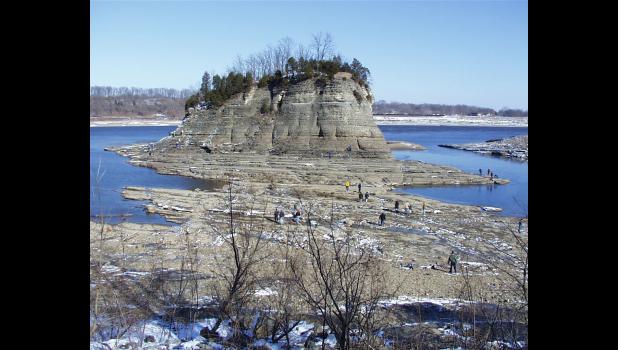 Sometimes...life is just a walk on the beach...

Last Saturday afternoon was a nice time to go for a walk on the beach...

Not all that long ago, we would have considered such an adventure to be one of our Pandemic Dates. Now, the pandemic may be over for a lot of folks. We’re not quite sure about that, for very personal reasons.

With that in mind, we once again skipped one of our favorite things to do during the third weekend of October. Back in the Before Times, usually on a Saturday in mid-October, we would get in our motor car and take a trip back in time to visit the Fort Massac Encampment.

Over the years, we have really enjoyed taking the trip to Fort Massac State Park in Metropolis for the encampment. We like to be a part of a “living history” event. We hope to be able to go again next year...when the pandemic is “really” over...

Since we didn’t make the trip to the encampment, we decided to be a little part of history as it was actually happening.

We motored over to Illinois Route 3, the Great River Road, and headed north. Destination: Grand Tower. Along the way, we drove over the Big Muddy River. Right now, the river might as well be called Big Muddy Creek.

Thanks to our ongoing drought, the Big Muddy was low...really low. The last time we had visited the Big Muddy, on another Pandemic Date, we saw lots of wood ducks. This time. Not a duck to be seen.

The water level on the Big Muddy River turned out to be a bit of a preview for our visit to the Mississippi River. What we saw and experienced may have been more accurately described as the Mite Mississippi. Or the Maybe Mississippi.

As I mentioned earlier, one of the reasons we made the trip last Saturday afternoon was to experience a little bit of history as it was happening right in front of us.

The water level on the Mississippi is so low right now that folks can actually walk to Tower Rock, from the Missouri side of the river. You could try to walk over from the Grand Tower side of the river, but you would get a little wet. The way things are going, though, that could change...

“Tower Rock is an erosional remnant left as a result of Mississippi River channel shifts. The rock is composed of limestone of the Devonian period formed some 400 million years ago. Surrounding softer rocks were eroded away by the Mississippi River leaving the rock which stands about 60 feet above the average river level.

“Tower Rock has been the subject of much historical legend and lore. The first written description of this feature was by Father Jacques Marquette from 1673. William Clark mapped the rock in 1803 during their ascent of the Mississippi to begin the exploration of the Missouri River. At the end of the Civil War the U.S. Army Corps of Engineers proposed clearing rocks from the river at this location to eliminate obstacles to navigation. Upon a recommendation of the Secretary of Interior, then president Ulysses Grant issued an executive order on March 4, 1871, which spared Tower Rock from blasting.”

I find it rather awe-inspiring that on an early autumn day in 2022, the two of us were standing in a place which had been visited by explorers in the late 1600s...and by the Lewis and Clark expedition in 1803...

As far as I know, we did not see Father Marquette or President. We did see a cardboard cutout of William Clark and his partner in adventure, Meriwether Lewis.

An historical marker in Grand Tower, not far from the river, on a levee, explained that in November 1803, Lewis and Clark "and their party passed by here on the way west. They camped across the river. Clark sketched the area, the local landmarks of Tower Rock and the Sugar Loaf, and their keelboat anchored near the shore."

We did see a very, very low Mississippi River. And we did see lots of folks who had walked out to Tower Rock from the Missouri side of the river. They could walk out to the geological landmark because the water level is so low. Given the number of people, and the amount of traffic we saw, we were grateful to be on our side of the river.

I walked to what is now the current river’s edge. I looked back...and up to where The Other Half was standing. In July, she and a couple of special folks who spent some time with us during the summer had come to Grand Tower and walked along the river’s edge. At that time, the edge of the river was where she was standing. In July, I would have been walking along the bottom of the river.

The two of us enjoyed our warm Saturday afternoon in October walk on the beach along the Mississippi River. We even got to be a little part of history.