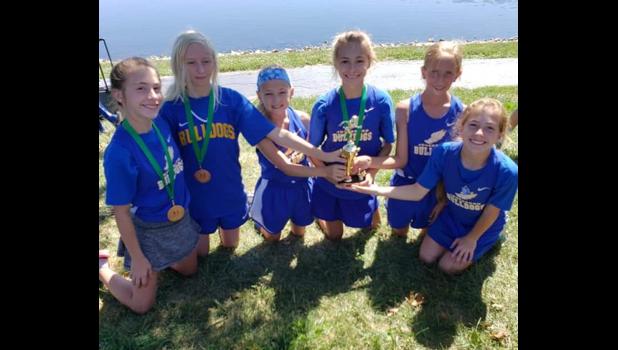 Anna, Jonesboro and Lick Creek cross country teams made the two hour bus ride to Smithton to compete at the Smithton Invitational on Saturday. The local teams competed against some very talented Metro East schools.

The Jonesboro Lady Bulldogs were able to outpace the entire field with a score of 56 points.

Jonesboro was followed by Smithton with 73, Mascoutah with 120 and Lick Creek in 4th with 122.

She was followed by little sister Raegan Jones, who came in 5th with a time of 13:15.

Briana Hileman was next for the Lady Bulldogs in 12th with a time of 13:37.

This was the second meet win for the Lady Bulldogs this season.

“These kids have grasped this sport in the first year of competition. They work really hard and very seldom do any of them miss practice, and it is starting to show,” coach Matt Denny stated.

Jonesboro doesn’t have any 8th graders on their team so the future looks as good as the present, he said.

The Lick Creek girls finished in 4th place with a very young team as well.

The Lady Eagles were led by 5th grader Jadyn Gerardi, who stayed undefeated on the year at 4-0. She finished the race in 1st place with a time of 12:25.

Next for the Eagles was Lydia Jerrels in 14th, followed by Kylee Myers in 22nd.

Meranda Wright was 39th  followed by 3rd grader Lilliah Hoehner who rounded out the scoring in 46th place. Mya Clutts came in 49th for the Lady Eagles.

On the boys’ side, Zach Henry from Anna came in 10th.

The teams head to Du Quoin on Thursday, today.