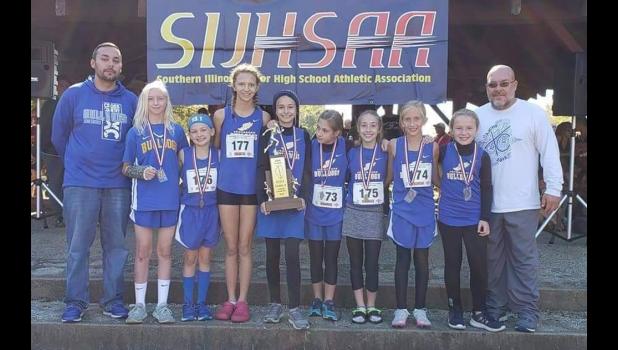 Jonesboro School was in its inaugural year for cross country this year, and what a year it was, coach Matt Denny said.

Denny said the kids started training in July, with a lot to learn along the way.

The Bulldogs headed to Foundation Park in Centralia for the SIJHSAA Class S cross country championships on Saturday.

Jonesboro finished with 141 points, behind cross country power St. Bruno Catholic of Pinckneyville, which had 108.

Jonesboro was followed by Aviston with 145 and Field-Farrington with 180.

The Lady Bulldogs were led by Zoe Jones, who finished in 9th place with a time of 12:00.

Second for the Lady Bulldogs was Reese Jones in 16th place, with a time of 12:20.

Leek was followed by Kenzie Miller, who finished in 12:46 which was good for 42nd place.

Next for the Lady Bulldogs was Briana Hileman, who was running with a broken arm. She finished in 47th with a time of 12:52.

Mackenzie Pearson rounded out the Jonesboro team in 67th place with a time of 13:21.

There were 235 runners in the girls’ race.

The Jonesboro girls’ team will return everyone next year, they have no 8th graders on the team. The future looks  very bright for the Lady Bulldogs, Denny said.

Competing for the Jonesboro boys were 5th graders Ben Marggraf and Blake Abernathy.

There were 270 runners in the boys race.